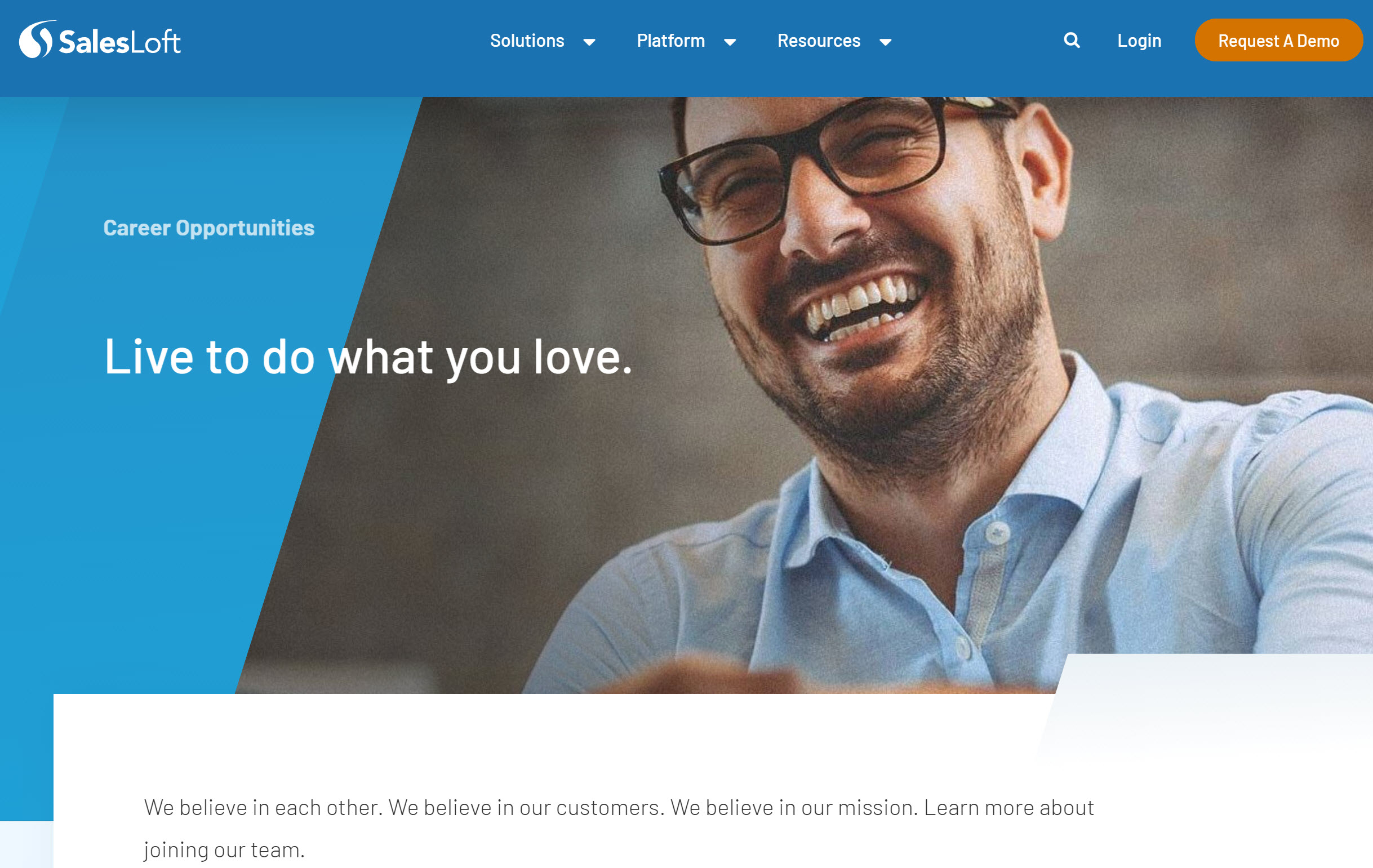 How To Create A Website With The X Factor: The SalesLoft Example

Your website should do more than attract customers. Learn how SalesLoft use their website to help win the war for talent

A company’s website does many things: it provides an instant first impression to first-time visitors, who might become future customers. It conveys the company’s brand, products and services, as well as information about what the company does, and, if they’ve paid some attention to their culture, why they do it. For repeat visitors, the website might also provide a place to read, watch or listen to that company’s newly published content on their blog, vlog or podcast.

But there is a function a website plays that I think is all too often overlooked: forging a connection with potential employees and communicating the culture in a clear, focused, deliberate way. When people are looking for their next place to work, a company’s website is somewhere they’ll typically spend anything from a few minutes to many hours, as they try to get a sense of what it’s like to work there and whether they will fit with the culture and vice versa. It is therefore naïve at best and dangerous at worst to overlook the role a company’s website plays in communicating its culture to the outside world. Not only can a poorly communicated culture attract the wrong talent, but it can deter the star players who are exactly the kind of people you are trying to recruit.

To illustrate, put yourself in the shoes of an imaginary software engineer who is considering her next career move. You hear from a friend about what sounds like an interesting company that is hiring developers, so you decide to investigate them to get a better sense of who they are and what they do. Apart from wanting to clarify that you are going to be challenged, work on interesting, cutting-edge technology, and be given the chance to learn and grow, you really want to know about the culture of the company. All things being equal, you know that culture makes a world of difference between a good employer and an exceptional one. Think for a moment of all the different touch points you could have with a company before, during, and after the interview process that would give you a better understanding of their culture. The website, if it had been given the right attention by the company, could be one of the most important, compelling and meaningful points of contact between you and your potential employer before you meet them in person.

In my research into culture, I have consistently found that nine out of ten companies have done very little to turn their culture into a demonstrable business asset. While the other 10% might be leap years ahead of the competition when it comes to defining and utilising their culture, what often lets them down is that they generally do such a poor job of conveying their culture to the outside world. Often approached as little more than a tick-box exercise, you typically only see basic information on the careers page, with little creativity or thought given to conveying the culture across the rest of the website. To that software engineer seeking a new position, this would be quite a disappointment.

This is why the CultureGene team are conducting research to find out which companies communicate their culture most effectively online. Our hypothesis is that paying attention to how you convey your culture online can give a company the “X factor” that will make it truly stand out from the crowd. As an example of this, we have recognized SalesLoft as a company that does an exceptionally good job of communicating their culture and here is why.

Both the image and the copy say something about the culture at SalesLoft. Firstly, the photo: who wouldn’t want to work with such a friendly looking group of people? The photo, Engage with Integrity and the paragraph do a great job of telling a potential employee what the company does while also giving some insight into how it does it. We’re here to help you connect with customers on their terms sets the expectation that the potential employee and the customer are both important to the company.

You can tell from the copy on this page that the company has done some deep work on its values. It communicates that values are what fundamentally “drive” people to do their best work, and the values themselves have been carefully thought through. Each is expressed in three words, with an explanation of the value given from a shared perspective. You get a real sense of the voice of the company and what they stand for from this page.

Another great blend of image and copy, this time showing a group of female SalesLoft employees, potentially showing that the company has its eye on the ball when it comes to D&I and providing opportunities for women to develop and lead. The deceptively simple promise made here, that “you’ll grow more here than you would anywhere else,” tells the potential employee a lot about the culture and experience of working here. It appears that you can expect to be stretched out of your comfort zone on a regular basis.

Some companies check the Corporate Social Responsibility box because it’s the “done” thing; others live and breathe a culture with philanthropy and giving are at its heart. SalesLoft, from this part of the website, appears to fall into the latter category. As with their evidently deep work on values, it’s clear that they have thought about philanthropy in a deep and robust way, and have really worked to understand what it means to them–the fact that they ‘pay it forward’ to the local community in Atlanta attests to this, as does the section explaining that they donate more than just money. To a prospective employee who wants to work for a company doing good in the world, this part of the website could make SalesLoft a dream employer. Can your company say the same?

These photos really give the ‘feel’ of what it’s like to work in this company – there are dress up days where people wear unicorn onesies, huge cakes celebrating people’s ‘Loftiversaries’ and lots of evidently close relationships. The photos look natural and people’s engagement with their colleagues shines through, making this look like a really appealing place to work. Because of this, the #1 Best Place To Work award doesn’t feel cheesy or forced; it looks real and believable, fully deserving the centre spot in the montage.

It takes a certain kind of boldness to consistently let potential employees know that a job with this company will be “the best job you’ve ever had”–but there’s something about it that rings true on the SalesLoft website. The callout is simple: people who have the opportunity to work “anywhere you want” are invited to consider applying to SalesLoft. If they do, they’ll get the chance to do brilliant work and to become better people. The offer is pretty compelling.

Awards aren’t everything, but a company that holds a succession of awards like this does reflect something positive about the culture. The message to potential employees is clear: this is not an average company. You can see the company’s growth as it progresses from being named a “pacesetter” from 2015-17 to being named the number one top place to work in Atlanta and one of the ‘national best places to work’ in 2018. Very encouraging.

The perks page shows a comprehensive and thoughtful range of employee benefits that take all sorts of personalities, lifestyle choices and ways of working into consideration. It’s clear that SalesLoft is a culture of high trust, offering unlimited vacation and stating from the outset that employees are trusted to know what they need to do. As with the work on values, it’s clear that a lot of thought has gone into the ‘why’ behind each perk, which the copy clearly communicates.

This might be the most generous parental leave policy around. How many employers do you know who will pay for your diapers for a year, get meals delivered to your home and organise and pay for your house to be cleaned? This is clearly not just a company that has put a policy together because it has to. It is almost as if parents designed it themselves. For individuals with a sense that they want to have a child at some point in the future, this package makes SalesLoft an incredibly appealing potential employer.

Again, it’s the attention to detail that makes this page so impressive. Other than real estate agents, I can’t think of many companies that put so much effort into answering questions that people might not even know they have yet–but of course, if you were going to move to Atlanta for work, at some point you would be wondering what the city is like. SalesLoft have gone the extra mile for their applicants by providing an overview of why their city is a great place to live–with the offer of connecting people who want to walk to work with colleagues who do the same. Impressive stuff.

The company’s philanthropic mission provides more evidence of just how deeply embedded their values are. By stating publicly that their community is as important to them as their team members and customers (which, I think it is important to note, are listed in that order), they have put a stake in the ground and provided a standard that they can be held accountable to.

As with the other aspects of this company’s culture, the attention to detail and robustness of thought is evident in how they approach discrimination, philanthropy and grants. This tells any potential employee that this is a thoughtful, caring company that properly considers its approach to all aspects of its culture–and in the middle of these clear boundaries is the sentence about Lofters having “huge hearts,” which will appeal to the kind of people who are a good fit for the culture.

You can tell from reading these pages that SalesLoft have not simply slapped some nice words and pictures up on their website. They have thought deeply about all aspects of their culture and done an exceptional job of putting them across to the reader. I encourage you to have a look at how they communicate their values and differentiate their company via any of their job ads listed on their website. Notice how the ads all start with the list of the values, repeats them again further down the ad and includes the company’s “Mission and Vision.” I particularly like the way they describe what the successful candidate will achieve within one, three, six, nine and twelve months of joining and they reiterate the claim made on the website “You will grow more here than you would anywhere else, that is a promise.”